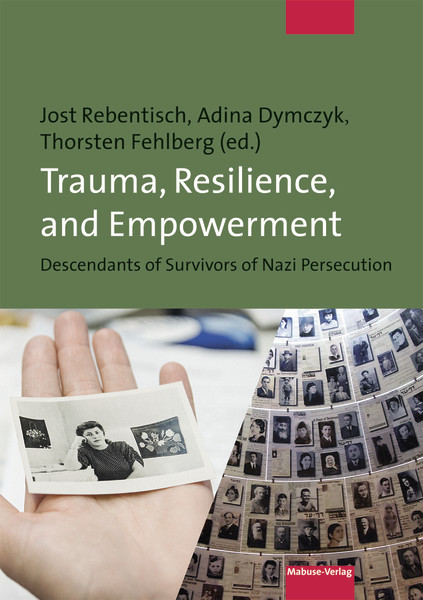 Descendants of Survivors of Nazi Persecution

As is well known, traumata can be passed from one generation to the next; and hardly any other group is so affected by this phenomenon as the descendants of those persecuted by the Nazis. Yet, how exactly does this transfer take place? What role do family traditions and continued social practices play? Might genetics play a role? Furthermore, can this cycle at all be broken?
The descendants of those persecuted by the Nazis can draw on unique resources and skills. They make significant contributions to political and social confrontations with the Nazi era, and they work for the welfare of the survivors. Many are active in political education and advocate for an appropriate culture of remembrance. In a time of increasing right-wing populism, their views are indispensable.

This publication was made possible with support from the German Federal Ministry for Family Affairs, Senior Citizens, Women and Youth.

Jelena Wachowski
The Second Generation in the Restitution Process for Cultural Assets confiscated due to Nazi Persecution, in accordance with the Washington Principles on Nazi-confiscated Art

Julia Bernstein, Florian Diddens
Echoes of the Nazi Era: Jews in Germany amid routine Trivialisation of the Holocaust and antisemitic Attacks

Miriam Victory Spiegel
The Emotional Conflicts of the Second Generation

Marina Chernivsky
(Hi)stories in a Room

Dani Kranz
“It took me a few years until I understood that I am, as a matter of fact, Jewish”: The third generation writ small going large as a generaction

Friedhelm Boll
The Second Generation learn about themselves

Anita Haviv-Horiner
“Home is where?” – Children of Holocaust Survivors between Germany and Israel

Anita Haviv-Horiner
The Tribe of the Second Generation

Christa Bröcher, Klara Tuchscherer
Insight into the Work of the Group Children of the Resistance – Antifascism as a Duty

Treatment and the Future

Anne Klein
Descendants of the Victims of Nazi Persecution: political Intervention, biographical Practice, and the Transformation of Remembrance Culture

Biographies of the Authors and Editors

Dr Jost Rebentisch is a historian. After working as a research assistant at the Cologne Stadtmuseum, he joined the Bundesverband Information und Beratung für NS-Verfolgte in 2002, where he has been Managing Director since 2014.

Adina Dymczyk is working on her doctorate at the Humboldt University of Berlin on the transgenerational transmission of trauma and is a member of the Bundesverband Information und Beratung für NS-Verfolgte.

Thorsten Fehlberg is a graduate human geographer and political scientist and works for the Bundesverband Information und Beratung für NS-Verfolgte.